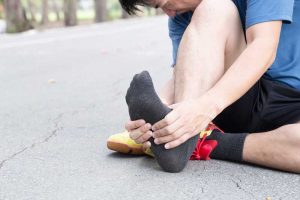 Intense therapeutic ultrasound can effectively and safely reduce pain for patients with chronic plantar fasciitis, according to a new study in the Journal of Foot and Ankle Surgery.

The study focused on 33 patients receiving two ultrasound treatments on plantar fascia tissue with the goal of reducing pain by 25 percent or more. At follow-ups of four, eight, 12 and 26 weeks, respectively, 72 percent, 81 percent, 86 percent and 79 percent of patients met the study’s pain reduction criteria. At four, eight, 12 and 26 weeks, respectively, mean pain scores decreased from baseline by 39 percent, 49 percent, 51 percent and 44 percent, according to the study. Researchers added that the size of hypoechoic lesions had significantly decreased at eight and 12 weeks.

Study coauthor Bob Baravarian, DPM, FACFAS, notes he was surprised that therapeutic ultrasound, which he had not previously used for plantar fasciitis, facilitated pain reduction without invasive treatment. He notes the procedure reduces pain due to scar tissue break up, neovascularization and possible small fiber nerve interruption.

Therapeutic ultrasound “works exceptionally well,” according to Dr. Baravarian, an Assistant Clinical Professor at the UCLA School of Medicine, and the Director and Fellowship Director at the University Foot and Ankle Institute in Los Angeles. He notes the study researchers delivered the five-minute treatments twice with four weeks between treatments.

Dr. Baravarian notes one would use therapeutic ultrasound for chronic cases of plantar fasciitis that do not respond to conservative options. He says the treatment is similar to the shockwave or platelet-rich plasma (PRP) treatment timeline. However, he notes it is less invasive than PRP and facilitated a better overall response in the study in comparison to his clinical experience with PRP.

Combining a supramalleolar osteotomy with a medial distraction arthroplasty can be an effective treatment approach for varus ankle osteoarthritis and may also improve the correction of talar tilt, according to a new study.

The retrospective study, published in the Journal of Orthopedic Surgery and Research, looked at 34 patients who had a supramalleolar osteotomy with or without a medial distraction arthroplasty for varus ankle osteoarthritis with increased talar tilt angles. In both groups, researchers noted improvements in the tibial anterior surface angle, talar tilt angle, talocrural angle, tibial lateral surface angle and hindfoot alignment angles at a mean follow-up of 61 months. Study researchers add that those who had a medial distraction arthroplasty in addition to the supramalleolar osteotomy had smaller talar tilt angles.

Combining a supramalleolar osteotomy with a medial distraction arthroplasty is a relatively simple way to improve pain and function in patients with varus ankle osteoarthritis that does not preclude further treatment options should the arthritis progress and require arthroplasty or arthrodesis, notes Craig Camasta, DPM, a faculty member of the Podiatry Institute.

Whenever one is performing supramalleolar osteotomies, the surgeon must hold the talus in the distracted position postoperatively, says John Grady, DPM, the Scientific Chairman of the Midwest Podiatry Conference. As he notes, using external fixation for this distraction allows a more consistent way of holding the talus in the correct position and distraction with external fixation does not cause the pressure necrosis that casting can cause. In addition, Dr. Grady says supramalleolar osteotomies sometimes require more distraction than casting can provide.

“Supramalleolar osteotomies have their own advantages in that they are the best way to realign malaligned joints, therefore allowing decreased degenerative changes in the ankle joint,” says Dr. Grady, the Director of Podiatric Residencies at Advocate Christ Medical Center and Advocate Children’s Hospital in Illinois. “Distraction arthroplasty does not have such an advantage alone when studied long-term.”

However, Dr. Camasta cites potential drawbacks including the normal risks of surgery for arthritis, such as infection, delayed/non-union, progression of arthritis, and failure to improve pain and function. Dr. Grady also cites the risk of potential external fixation complications such as pin tract infections although the study authors reported no pin tract infections.

Dr. Camasta says callus distraction is an alternate method for patients with ankle osteoarthritis and talar tilt. Primary arthrodesis or arthroplasty are also options depending on individual patient factors, according to Dr. Camasta, who is in private practice at Village Podiatry Centers in Atlanta.

Two new agents for plaque psoriasis, a topical and an injectable, have received the approval of the Food and Drug Administration (FDA).

As Tracey Vlahovic, DPM, emphasizes, psoriasis is challenging on the plantar surface of the foot due to the plaque thickness, fissures, pruritus and pressure in shoes.

“(Plaque psoriasis) is not only a skin condition, it affects the whole body,” says Dr. Vlahovic, a Clinical Professor in the Department of Podiatric Medicine at the Temple University School of Podiatric Medicine. “From our patients’ perspective, it is difficult to walk, stand and do regular activities when the lower extremity is involved.”

Dr. Vlahovic calls a potent topical steroid that one can use for more than two weeks “fantastic.” With Duobrii, she notes the retinoid component helps to thin the plaque. Treatments such as Duobrii and Skyrizi would be “first-line” treatments for plaque psoriasis, notes Dr. Vlahovic.

• Treace Medical Concepts recently announced that its Lapiplasty® 3D Bunion Correction System has received Food and Drug Administration (FDA) clearance for expanded indications to include the treatment of pediatric patients greater than 12 years of age.

• Treace Medical Concepts cites a study in Foot and Ankle International showing more than 96 percent of patients treated with the Lapiplasty maintained three-plane correction at a 13.5 month follow-up. The company says, on average, patients began bearing weight on their operative foot in a boot about 10 days after surgery.

• A recent study assessing daily use of bilateral custom ankle-foot orthoses (AFOs) found no significant benefit of bilateral AFOs for fall prevention in comparison to fitted walking shoes. The study was published online by the Journal of the American Geriatrics Society.

• KCI recently announced that the FDA has granted the company’s De Novo request for the Prevena™ Incision Management System, which is indicated to aid in the reduction of superficial surgical site infections in patients at high risk for postoperative infections in Class 1 and Class 2 wounds. KCI also announced that the FDA has granted 510(k) clearance for Dermatac™ Drape, a proprietary silicone-acrylic hybrid drape, an accessory to certain negative pressure wound therapy systems with KCI.